Inaugurated in 2015, our VOICES: Veterans Storytelling Project, guides vets in compiling and sharing their stories of life before, during, and after military service. We are resuming live presentations in 2023, with the first one scheduled for Saturday, May 13 at Heroes Hall, OC Fair & Event Center, Costa Mesa.

We also invite you to join our Facebook VOICES group 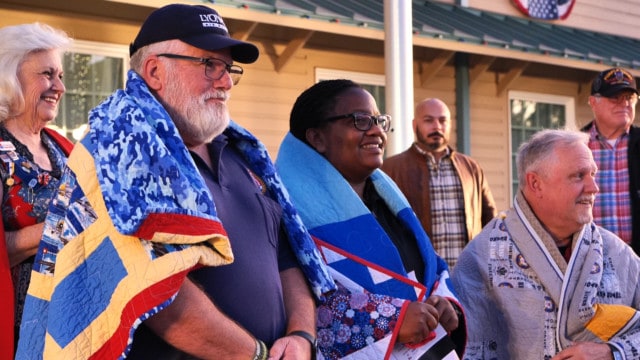 Hear what veterans have to say about participating in VOICES:

Throughout 2020 and 2021, VOICES: Veterans Storytelling Project has continued its interviews with veterans, sometimes telling the stories of their services, sometimes asking them to talk about their own art. You can see some of them here, or click the button to go to the complete Playlist on the Arts Orange County YouTube Channel

In February of 2015, the Orange County Community Foundation released the results of "The State of the American Veteran: The Orange County Veterans Study," which found that military veterans coming home to Orange County are significantly underprepared for civilian life. In fall, 2015, Arts Orange County explored one means of helping to address that situation by encouraging veterans to talk about their experiences and to share them with fellow veterans and the public in performance. This was effected through a Veterans Storytelling Project, in collaboration with Veterans First, a local veteran's services agency, and by engaging the services of an experienced teaching artist from Chance Theater.

By focusing upon veterans' own experiences as the core material for creative activities in these workshops, the project offers participants the opportunity to share with their families, fellow veterans, and members of the public a better understanding of the life of a veteran--its challenges as well as its points of pride. This workshop provides veterans with the opportunity to learn to express themselves creatively, and although its primary purpose was not expressly therapeutic, the participating veterans reported that it had a tremendously cathartic effect upon them.

The pilot year of the project was funded by California Arts Council's Veterans Initiative in the Arts Program and the program was extended into 2016 through a second-year grant from the CAC with matching funds from the Orange County Community Foundation and the William Gillespie Foundation, and was marked by the addition of a partner, the newly-opened Heroes Hall Veterans Museum at OC Fair & Event Center in Costa Mesa.

Orange County is home to over 130,000 military veterans. Open to all interested veterans, including active military, Arts Orange County's Veterans Storytelling Project works through a number of local veterans services organizations to issue a call for participants. This includes California Department Of Veterans Affairs - Cal Vet Veterans Services Division in Santa Ana, which has taken a keen interest in promoting the project to its 20,000 local veteran contacts, and Veterans First, which has a network comprised of National Coalition of Homeless Veterans (NCHV), Vietnam Veterans of America (VVA), the American Legion, Elks Club, AMVETS, Veterans of Foreign Wars (VFW), Disabled American Veterans (DAV), Wounded Warrior Battalion - MCB Camp Pendleton, Soldiers Project and the Orange County Continuum of Care. Additionally, Heroes Hall Veterans Museum has already established a network within the local veterans community and its parent organization, OC Fair & Event Center, has a strong communications network among the many labor unions in Orange County, which count hundreds of veterans among their members.

The Veterans Storytelling Project has attracted a diverse group of veterans as participants - ranging from a 25 year old veteran of the war in Afghanistan to a 102 year old woman who served in the Army during World War II in the Manhattan Project, as well as Vietnam War and Korean War veterans. The group has included participants who run the gamut from those who have been homeless and are now living in group homes, have or continue to suffer from PTSD, have been incarcerated because of offenses they committed during their difficult transition to life after the military, were discharged honorably or dishonorably, live independently, and have successful careers and relationships. All have fascinating stories to tell about life in and out of the military. Some participate only in the story sharing portion of the workshop, preferring not to take the stage in performance, while others wholeheartedly embrace the opportunity to tell their stories directly to an audience. (The 102 year old veteran told her story through a video segment, and attended the performance as a member of the audience.) The audience itself is comprised not only of friends, family members, and other veterans who live in the group homes or participated in the workshop, but members of the general public who learn about the performances through promotional activities. Each performance is followed by a Q&A session.

VOICES is made possible in part through funding from: (Click to Expand/Contract)